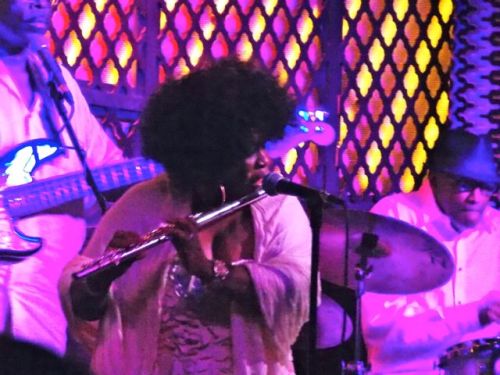 “The First Lady of the Flute,” Bobbi Humphrey, celebrated her 40th anniversary as a recording artist with two sold out performances on August 11th at Ginny’s Supper Club in Marcus Samuellson’s Red Rooster restaurant in Harlem.

She told the crowd, “Feel the music, feel the love. I am so excited. From my days at Texas Southern University and S.M.U. in my hometown of Dallas, my dream was to play my flute.” She continued, “I believe through the power of music, we can explore the power of pure possibilities. Let’s enjoy the ride together!”

Of course Bobbi took the audience on a musical ride with her signaturetune “Harlem River Drive,” as well as “Chicago, Damn” from the 1973 album Black and Blues, and a cover version of Lionel Richie’s “Hello.”

It was appropriate that she was performing in Harlem just one block from where she made her New York City debut more than four decades ago on Amateur Night at the Apollo Theater. Her career highlights include performing with Duke Ellington, recording with Stevie Wonder on his 1976 classic album Songs In The Key of Life, and being recognized by Billboard magazine as Best Female Instrumentalist. Earlier this year she received a Lifetime Achievement Award at the International Women in Jazz Festival in New York. 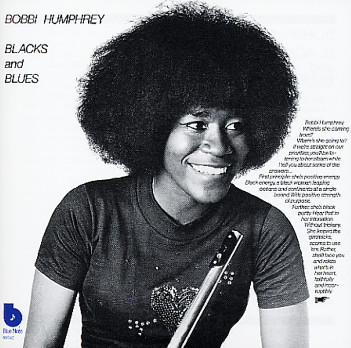 Humphrey’s professional career began in 1971 when she was the first female signed to Blue Note Records. Certainly a lady playing a flute must have seemed something of a novelty then. Humphrey proved, however, she was not just a first or novelty, but a talent to be reckoned with. For in 1973, her LP, Blacks and Blues was not only a huge commercial success, but established a strong crossover market for her. Also, in 1973, she was invited to the prestigious Montreux International Music Festival in Switzerland where Leonard Feather, noted critic of the Los Angeles Times, acclaimed her the surprise hit of the festival. Since then Humphrey has continuously proved her sustaining power, for today she is the only successful female urban-pop flutist on the scene. Further proof is the fact that she was acclaimed Best Female Instrumentalist (1976 and 1978 to both Billboard and Record World, and Best Female Vocalist in Cashbox.) This is certainly a milestone for any instrumentalist.

Born in Marlin, Texas and raised in Dallas, Humphrey’s training on flute began in high school and continued through her years at Texas Southern University and Southern Methodist University. It was there that Dizzy Gillespie spotted her when he served as a judge in a school-wide competition. With Gillespie encouraging her to pursue a career in New York City, Humphrey wrote a letter to New York’s famed Apollo Theatre and received a telegram soon afterwards telling her, “We have reserved a spot for you on Amateur Night.” She didn’t take further convincing, nor did she have trouble finding her spot in the music industry. The title of one of her Epic LPs, “The Good Life”, best describes her career.

Humphrey has played with the best, ranging from Duke Ellington (her third day in New York) to Lee Morgan to Stevie Wonder (featured on Songs In The Key of Life LP in 1977). Between 1971 and 1976, Bobbi recorded six albums for Blue Note Records. In 1974, she recorded the successful Satin Doll LP. 1977 was another big year for Humphrey. For the third consecutive year she was voted Best Flutist in Ebony Magazine Readers Poll. She was signed to Epic Records and released Freestyle in ‘78, followed by The Good Life in ‘78. Whether it is from the stage of Carnegie Hall or an intimate jazz room in Europe or Atlanta, live performance remains her first love.