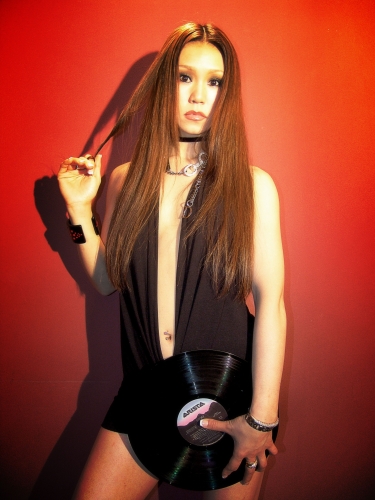 “DJ June is one of the best club DJ’s in the world.”

After rocking New York City’s elite nightclubs and the most popular venues in Los Angeles, Miami and Atlantic City, DJ JUNE has quickly emerged as one of the world’s elite female DJs. Black Eyed Peas, Diddy, Janet Jackson, Jermaine Dupri, Wendy Williams, Lil Kim, Vivica A. Fox, Jim Jones, and Fabulous are among the many celebrities who can attest to her turntable wizardry at numerous all-star special events, CD release parties, and birthday celebrations.

DJ June draws the crowds to her current weekly Manhattan gigs at Sutra (with Tony Touch), Sky Room, XVI, and BOB, and every Friday and Saturday to Providence AC at the Tropicana Hotel Casino in Atlantic City. Her media appearances include MTV, MTV2, BET, Court TV, NYC-TV, as well as magazines XXL Scratch, Swede, Haunt and Hush.

Born in a small town near Kobe, Japan, June’s first foray into music was playing saxophone and creating beats which led to recording her own instrumental album. After working in a record shop in Osaka and teaching herself how to operate the 1’s and 2’s, her love of music inspired her to move to New York to pursue a career as an audio engineer. After graduating from the Institute of Audio Research, June became a studio intern but found the lack of professionalism among her colleagues disappointing. She returned to the retail music business working at one of New York’s most respected vinyl records shops, Beat Street Records in Brooklyn. Despite her limited English at the time, she amazed the customers with her comprehensive musical knowledge. Soon her regular clientele included every significant DJ in the New York City area and from around the world. She evolved into the store DJ, and her skills so impressed The Source “Hip-Hop Icon” DJ Scratch (Jay-Z, Run-DMC, Diddy, Busta Rhymes, EPMD) that he became her mentor and they’ve worked together for the past five years. “DJ June is one of the best club DJ’s in the world,” says Scratch. “I don’t put her in the female DJ category.” June is humbled to be associated with a turntable legend. “I had read about Scratch,” June says proudly. “I am so excited to be working with him.”

She continues to work closely with DJ Scratch including hosting her “Toyko Drift” show every Wednesday night on his Internet radio station, www.ScratchVision.com. “I am honored to have gone from Beat Street Records where I sold records to Scratch to becoming his protégé and a member of his team,” says June.” I am very proud to work with him and also to work with Tony Touch (Eminem, Snoop Dogg, Busta Rhymes, Sean Paul) on “Toca Tuesdays” for the past four years at Sutra. He’s a legend and he’s my big brother. I am very lucky to work with them every week.” Touch is also honored to work with her, simply saying, “DJ June is the best!”

Another iconic admirer is DJ/music producer Just Blaze (Jay-Z, Eminem, Drake, Kanye West, Mariah Carey, Usher). “DJ June is one of the brightest talents in the NY nightlife scene today,” states Blaze. “She always surprises me with her selections, which doesn’t happen too often these days. Rock on girl!”

June’s DJ career began in 2005 when a Beat Street client who was a promoter hired her for her first gig at a Miami club. She was an instant success, and another client hired her to spin at his 667 club in Brooklyn. What began the first week as an empty venue soon became jam packed in three weeks with an endless line around the block. Word of an incredible Japanese female DJ who could spin the best in house, electronica, R&B, hip-hop, reggae, dance, top 40, and old school classics rocking downtown Brooklyn brought out all the stars and promoters. She was immediately in high demand for the most prestigious events and the most popular clubs in New York.

Now June is helping others follow in her footsteps by hosting DJ seminars in Japanese in New York. “My goal is to continue to hone my skills and work all over the world like my colleagues DJ Scratch and Tony Touch.” June says. “I am proud to be a DJ who plays a wide variety of music. Many DJs are limited to playing only one style. I can play one format depending on the taste of the audience, or when I host my own club nights, you’ll hear everything-house, reggae, R&B. hip-hop, electronic, top 40, dance, etc.”

Last year June fulfilled a dream of returning to Japan to perform for the first time in her native country. Now with new upcoming projects including a compilation CD in Japan, DJ June is ready to reach her goal of becoming a true international DJ spinning across the globe!