We never imagined anybody would be crazy enough to open a Sushi Bar in Harlem until we saw Jado Sushi on Frederick Douglas Blvd. and 114th Street last summer. We needed to discover who was responsible behind this new restaurant. We learned his name is Mr. Nobu and he agreed to share his success story with Harlem2Nippon.

H2N: What made you decide to open a Sushi Restaurant in Harlem? Have you had any experience in the restaurant business?

Nobu; It just happened by chance. I was living on the Upper West Side and I was forced to move out when my lease was up. So I was desperately seeking an affordable apartment and found a great place in Harlem. That was 8 years ago. Even though I fell in love with the down to earth great neighborhood, it was far from convenient when it comes to essential stuff like eating out and finding a store for a bottle of decent wine. Then I saw a great business opportunity. The real estate was relatively cheap so I opened a small wine shop called “The Winery” in 2007. It was a tiny store about a size of my kitchen so you don’t need high maintenance. I have no experience what so ever in the restaurant businesses, but I thought, “I wish there was a Japanese restaurant nearby where I can enjoy good food and wine,” and I opened one myself! You can go to places like “Brush Stroke” operated by Tsuji Cooking School in Tribeca but it is very expensive. I opened Jado Sushi in Harlem because I didn’t know anything about the business. I wouldn’t have done it if I knew it. 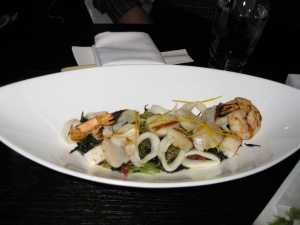 H2N: Jado serves a quality food in cozy atmosphere and became successful in such a short time. What did you do before you ventured into this culinary extravaganza?

Nobu: I was a designer. I was doing graphic design at an advertising firm in Tokyo in the 80’s. Bubbly days, you know. I was happy but I had a passion for Interior Design so I saved up enough money and I came to New York to study in 1985. Why New York? Because New York is number one in everything, honey, Art, Music, Dance, Architecture, Business………New York is the place to be! I studied Visual Merchandising at a college. Then I was teaching Package Designing course at F.I.T.

H2N: So basically your artistic creativity made Jado so unique and one of a kind in Harlem. You implemented the same visual merchandising concept into the restaurant business.

Nobu: Absolutely. I told the chefs, “Cook in Japanese way and present in French, each dish should look like visual art.” That is why our plates are all white. We apply our food with the same concept as package design. Our policy is to make food look prettier than it already is. The lighting is also a very essential aspect that helps create the environment. Light can be used to create realistic and fantastical effects in a wide range of visual media. Lighting is one of very important components of Visual Merchandising. I could go on and on……(lol) 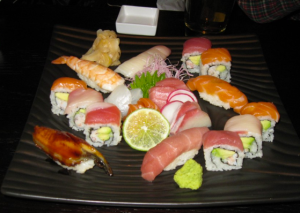 H2N: Wow, Nobu san, you are such an artist!! Let’s talk about the food. I was so impressed by your California Roll that comes with real crabmeat, not phony rubbery crap.

Nobu: All Japanese customers love it. Most of the American diners don’t even notice the difference (lol). I recommend Pork Rib, the best selling item on our menu, really tender and delicious! Sea Scallops are also very popular.

H2N: Are you the sole owner of Jado Sushi or do you have investors?

Nobu: I started with my own money. No investors, just me. I didn’t know it was this tough.

H2N: Unbelievable! No experience, no sponsors and you did it in Harlem!! It sounds crazy but you made it possible. You just thought Harlem needed a Sushi Bar……..I adore you.

Nobu: Like I said before, if I had experience in the restaurant business I never would have had opened a restaurant, not just in Harlem or any location.

H2N: Let’s talk about hiring. I noticed you have Japanese sushi chefs. Did you bring them from Japan?

Nobu: No. I recruited sushi chefs through newspaper ads but most of the waiting staff members are friends and acquaintances from Harlem. Don’t get me wrong. I hire professionals. I make sure each person knows what he or she is doing in that particular position and is professional about it. One thing about this place is we treat customers like I want to be treated because I am my own customer. So please come to Jado Sushi, we won’t disappoint you!

I personally love Jado Sushi for the finest sushi and great ambiance. I had a Bento Box the other day. It came with the choice of soup or salad and 3 pieces of sushi (tuna, salmon & yellow tail), Tempura (shrimp, mushroom & Renkon lotus} and Chicken Teriyaki (which I requested to replace with Salmon Teriyaki for an additional $3) served in black lacquer box. I’m so proud that I made this choice!!