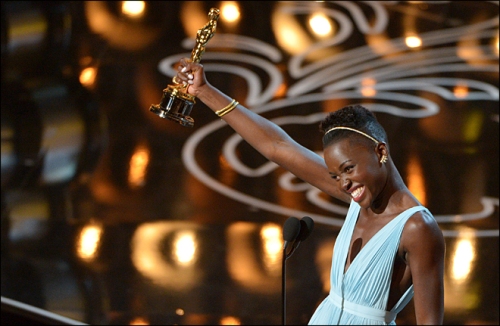 “Everyone deserves not just to survive but to live,” the British director Steve McQueen said in accepting the best picture award last night at the Dolby Theatre in Hollywood. “This is the most important legacy of Solomon Northup. I dedicate this award to all the people who have endured slavery.”

Best Actress in a Supporting Role

Lupita Nyong’o, the Kenyan actress who made her feature film debut in “12 Years A Slave” as the much-abused slave Patsey also won the best actress in a supporting role.

McQueen explained how he came up with the idea of making this film. After meeting at a Creative artists agency screening of Hunger in 2008, McQueen got in touch with screenwriter John Ridley about his interest in making a film about “the slave era in America” with “a character that was not so obvious in terms of their trade in slavery.”

Developing the idea back and forth, the two did not strike a chord until McQueen’s wife found Solomon Northup’s 1853 autobiography Twelve Years a Slave. “I read this book, and I was totally stunned,” said McQueen. “At the same time I was pretty upset with myself that I didn’t know this book, a firsthand account of slavery.” I basically made it my passion to make this book into a film.”