How Do You Keep Having Faith?

The movie “Black Nativity,” a feel-good musical about a family’s Christmas miracle opens on November 27, a night before Thanksgiving.

The movie directed by Kasi Lemmons (1997 Eve’s Bayou fame) is loosely based on Langston Hughes’s 1961 play of the same name, a seasonal tradition that recasts the classic Nativity tale with black performers who sing spirituals and hymns like “Go Tell It on the Mountain.” The movie adds original songs, like Ms. Jennifer Hudson’s big number, “Test of Faith.”

“Black Nativity” is set in the modern day and stars Forest Whitaker as the Rev. Cornell Cobbs; Angela Bassett as his wife, Aretha; Ms. Hudson as their daughter, Naima; and Tyrese Gibson as Loot, a streetwise hustler. Look for Nasir Jones, better known as the rapper Nas, as the street prophet Isaiah and Mary J. Blige as a ghetto-fabulous angel.

Nas explained his involvement in the project, “Kasi Lemmons called me up, and the fact that the movie was based on poet Langston Hughes’s work sold me on joining up.”

The story unfolds from the perspective of Langston, played by 17-year-old Jacob Latimore in his first big film role. Langston is the wary son of Naima, an embittered single mother, long estranged from her prominent parents. Faced with eviction, she puts him on a bus from Baltimore to Harlem to spend time with the grandparents he has never met, setting into motion accidental meetings, revelations of old secrets and a fantastical dream sequence of a blessed birth uptown. 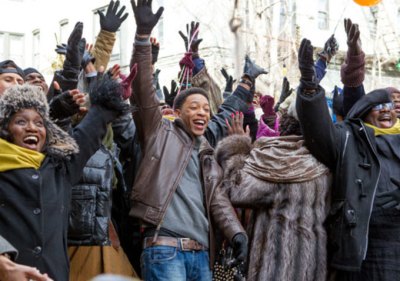 The famed Apollo Theater in Harlem appears on screen several times and the church choir scene was filmed at St.Luke’s Episcopal Church in Harlem. It was shot on a tight budget (about $17.5 million) in less than 40 days.

A new film adaptation of Langston Hughes’ stage drama “Black Nativity” comes complete with a soundtrack album that features performances by an all-star cast of vocalists, including Mary J. Blige, Nas and Oscar-winner Jennifer Hudson, whose song “Test of Faith”, along with the previously released track “Be Grateful.” The album was executive produced by Grammy winning super producer, Raphael Saadiq.

11.   Jesus On the Mainline – Forest Whitaker