Mick Jagger and Brian Grazer hosted a “funky good time” for the invitation-only crowd at the Universal Pictures premiere of Get On Up, the James Brown Story, on July 21, 2014 at The Apollo Theater in Harlem, New York. As Apollo President and CEO Jonell Procope said in introducing Jagger and Glazer, “I can’t think of a more fitting place for the premiere. The Apollo stage has always been synonymous with James Brown, and vice-versa.” 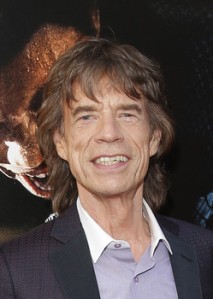 “The Hardest Working Man in Show Business” made his Apollo debut on Amateur Night and the famed theater on 125th street became his home with dozens of performances during his career. Rolling Stoneranked his iconic 1963 Live at the Apollo number 25 on its list of the 500 greatest albums (The magazine also named him the seventh greatest recording artist of all time). The Godfather of Soul’s life came full circle, as following his death on December 25, 2006 at the age of 73, his body was displayed in an open casket in the theater for thousands of fans to mourn a true legend.

Nearly eight years later, it was a night of celebration for the premiere of the biopic starring Chadwick Boseman (who portrayed Jackie Robinson in 42) as the pioneer of funk from Barnwell, South Carolina who recorded sixteen number one hits and was inducted into the Rock & Roll Hall of Fame in 1986. He was “Soul Brother Number One,” and songs such as his classic, “Say It Loud – I’m Black and I’m Proud,” became the soundtrack of the civil rights movement in the 1960s.

Jagger recalled seeing Brown perform for the first time at a matinee at The Apollo in the 1960s, and years later, he returned to have Brown call him up on stage. The Rolling Stones frontman admitted he was so embarrassed, he attempted to run away, and had to be literally forced onto the stage.

Directed by Tate Taylor, whose credits include the Oscar nominated The Help, Get On Up traces Brown’s incredible career from a youth of abject poverty and being abandoned by both parents, to imprisonment, to traveling the world in his own private jet. Boseman is brilliant recreating his mannerisms, his undeniable confidence, and the dynamic dance moves that made him “Mr. Dynamite.” He’s surrounded by a strong supporting case. Dan Aykroyd, who starred with Brown in The Blues Brothers, Blues Brothers 2000, and Dr. Detroit, portrays his agent and manager, Ben Bart. Jill Scott appears as Brown’s second wife Dee Dee Brown, Viola Davis plays the mother who deserted him, and Octavia Spencer is the aunt who raised him. Comedian Craig Robinson plays it straight as the celebrated saxophone player Maceo Parker who led his band.

The story line weaves back and forth from childhood to his unparalleled stardom, and describes how while serving time for robbery, his life turned around when he met gospel singer Bobby Byrd who was performing for the inmates. Brown eventually moved in with Byrd’s family, and they became close as brothers. Another friend was Little Richard, who shared valuable advice as they plotted their ascension into music history.

Get On Up presents the joy and the pain, the good and the evil in James Brown. He volunteered to perform for troops in Vietnam and risked his life as his plane was under attack, yet he arrived safely and entertained the soldiers. He also brought peace to Boston when he ignored the Mayor’s decision to cancel his concert on the night of Dr. Martin Luther King’s assassination for fear of rioting.

On the flip side, we are witness to his problems with domestic violence, and how his drug abuse led to the infamous two state police chase in 1988 that resulted in a six year prison sentence.

Of course, his infectious, unforgettable music is the true star of the film, and we hear many of his classics on stage, in the recording studio, and in rehearsal: “It’s A Man’s Man’s Man’s World,” “Cold Sweat,” I Got That Feelin’,” “Soul Power,” “Super Bad,” “Try Me,” “Say It Loud,” and the title tune, “Get On Up.”

Following the screening, the gala after party began in a luxury tent behind the Apollo, and Jagger, Tika Sumpter (who briefly appeared as singer Yvonne Fair). and Scott all separately burned up the dance floor. Robinson turned up the heat as the MC, taking the crowd higher to the James Brown tunes spun by his brother, DJ Cris Rob. A Soul Train line spontaneously formed, and as Jagger watched in admiration, who was the best dancer?… 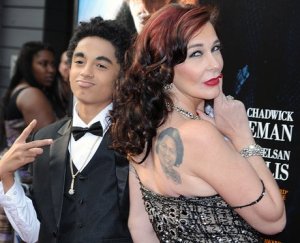 Dad would have been proud. The legacy continues.

Get On Up opens August 1.