Harlem Shake, which opened less than a month, already has lines out the door and unreasonable waits for its burgers and shakes.

Fortunately when Harlem2Nippon dropped by, the line wasn’t that long we ordered a classic cheeseburger ($6.95), regular fries ($3.50), and the signature Harlem Shake ($5.75) which is a ‘red velvet’ shake. If you’re a fan of Shake Shack, you’ll love Harlem Shake!  The burgers taste virtually identical (to me, at least) — and you can taste the freshness and the quality of the beef. The fries are light, crispy, and taste like they were cut today. Outstanding. Sweet yam fries ($4.50) were sprinkled with sea-salt and go perfectly with beer.

Croatian born owner Jelena Pasic said her goal is to make Harlem Shake, located on the corner of Lenox Avenue and West 124th Street, a neighborhood institution. She plans to do that by serving tasty burgers and catering to the area while also attracting the many tourists who frequent Harlem. “I tried to find a niche that wasn’t filled,” said Pasic, who has partners in the venture, including her husband, who is the head chef. “It was a no-brainer that Harlem needs a good burger place.” 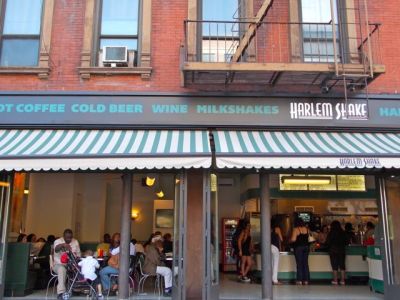 Pasic said the inspiration for the name of her restaurant came from the original 80’s dance Harlem Shake which was made famous by Hip Hop artists like P. Diddy and G. Dep. In 90’s (Remember the song ‘Let’s Get It’?)

They pulled the vintage 50’s retro theme off nicely without looking too kitschy. This joint was designed to look like it opened decades ago. Not far from the Apollo Theater this is a great spot to grab a decent burger after the show as it opens until 11pm on weeknights and 2am on Fridays and Saturdays. It’s a nice addition to the neighborhood.