END_OF_DOCUMENT_TOKEN_TO_BE_REPLACED

Juneteenth, also known as African-American Emancipation Day, is a holiday in the United States that commemorates the announcement of the abolition of slavery in the State of Texas in 1865. Nearly 2½ years after President Abraham Lincoln signed the Emancipation Proclamation and despite widespread rumors of freedom for slaves, it was not until Union soldiers rode into Galveston, Texas, on June 19, 1865 and Gen. Gordon Granger issued Order No. 3 that slaves learned officially that the Civil War was over and they were emancipated.

Juneteenth – a Novel by Ralph Ellison 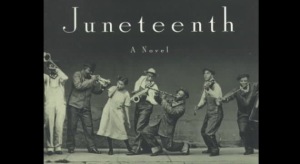 Ralph Ellison’s Juneteenth opens with the attempted assassination of Sunraider, a race-baiting, southern senator, on the floor of the U.S. Senate. Alonzo Hickman, an African American minister, has brought his congregation to Washington, D.C., to stop the assassination, claiming that he and his church members know Sunraider and know that he is in danger.