The Color Purple’ on Broadway December 15, 2015 at the Bernard B. Jacobs Theater

Jennifer Hudson and Cynthia Erivo star in a brilliant, gospel infused revival of The Color Purple onBroadway at the Bernard B. Jacobs Theater. Based on Alice Walker’s Pulitzer Prize winning novel, and the 1985 film starring Whoopi Goldberg, Danny Glover, Margaret Avery, and Oprah Winfrey (one of the musical’s producers), The Color Purple musical is a powerful statement of female empowerment. Directed by Tony Award winner John Doyle, with transcendent songs by Grammy award winners Brenda Russell, Allee Willis and Stephen Bray, the play tells the inspiring story of Celie (masterfully portrayed by Erivo who recreates her role from the London production), who overcomes decades of male abuse to find dignity, self-respect, independence, and

Set in rural Georgia in 1909, 14 year-old Celie is a mother of two children who she was forced to abandon by her uncaring father. Her only joy is the love she shares with her younger sister, Nettie (portrayed by Joaquina Kalukango). When a farmer named Mister asks her father to marry younger Nettie, “Pa” offers Celie instead, who he constantly refers to as “ugly.” He convinces Mister (Isaiah Johnson) to take her, offering a cow as part of the deal. Celie is separated from her beloved sister, and is constantly verbally and physically abused by Mister, who treats her like a slave. The sisters are briefly reunited when Nettie comes to stay with Celie and Mister, however when Nettie rebuffs his sexual advances, he banishes her from their home, vowing to never let the sisters see each other again. Nettie promises to write Celie, however the cruel Mister refuses to allow Celie to see her numerous letters, causing her to believe Nettie has died.

Contrasting the male dominated Celie is Sofia (Danielle Brooks), a bold, strong willed woman who intimidates and physically beats Mister’s son, her husband, Harpo (Kyle Scatliffe). She shows the timid Celie is it possible to rebel against controlling, disrespectful, chauvinist men in one of the many musical highlights of the show, belting the song, “Hell No.” Henpecked Harpo opens a Juke Joint, and willingly falls for the charms of a sassy waitress named Squeak. He hires Mister’s former lover, the famed singer Shug Avery (portrayed by Hudson) to perform at his club. When Celie takes care of Shug, she experiences tenderness for the first time, and they fall in love, passionately demonstrated by their heart rendering duets, “Too Beautiful For Words,” and “What About Love?” However, Celie discovers Shug’s promiscuous nature when she brings home a new boyfriend. Yet Shug unlocks a key to Celie’s life, handing her one of the hidden letters, and Celie rejoices as she discovers that Nettie is alive. She is now a missionary in Africa and has found Celie’s long lost son and daughter. 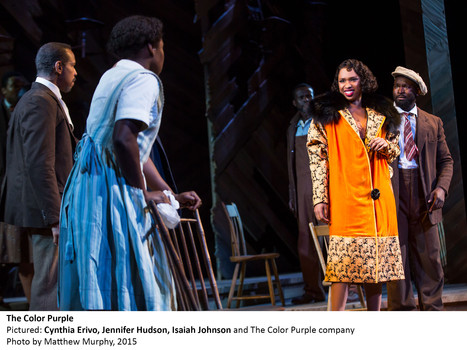 After Shug discovers the extent of Celie’s suffering, she decides to rescue her by moving away from the evil Mister to her home in Memphis. In an emotional pinnacle, Celie releases her years of anger and torment, defiantly confronting Mister about his brutal behavior, ultimately leaving him and placing a curse on his soul. This marks the turning point in Celie’s depressed life, symbolized by the change from the bland wardrobe worn by the entire cast in rural Georgia, to vibrant pastel colors in the Mister-free good life of Tennessee.

The freedom and happiness is contagious, affecting the constantly bickering Harpo and Sophia, who reconcile, performing the highly provocative tune “Any Little Thing” dripping with sexuality. While the son is in Heaven, the father is in Hell, feeling the effects of Celie’s curse, being ostracized and realizing he is universally hated. As Mister drowns in misery, Celie basks in her new glory, and discovers her talent for making pants. She transitions into a successful entrepreneur, and truly becomes independent for the first time in her life. Her estranged husband finally come to terms with his despicable life, and also makes a positive change, discovering the quality of compassion. He discovers that Nettie and Celie’s children are in Africa, and decides to help bring them home. 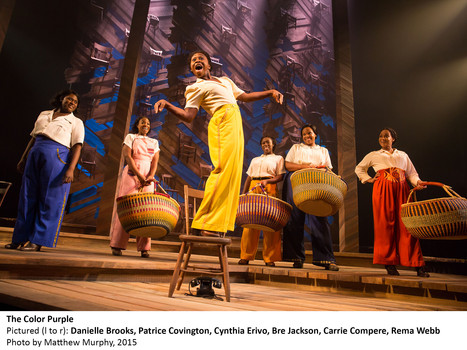 As Mister attempts to make amends for his inhuman behavior, the two women in his life, Shug and Celie, have a showdown over their budding relationship. Shug tells Celie she wants to go on the road and have one last fling with a man before returning home in six months. Celie realizes she is no longer dependent on Shug’s love, or love from anyone else. After living a life devoid of love (with the exception of sister Nettie), she finally claims love of herself. In the play’s climatic moment, Erivo commands the stage in an unforgettable solo performance, confidently declaring, “I’m thankful for who I really am. I’m beautiful,” in the show’s showstopping song. “I’m Here.”

In the final picnic scene, Mister, a clearly changed man, proclaims his love for Celie, asking to marry her again, and have a real marriage. She politely refuses, before he provides her with the greatest gift of all. Celie is surprised by the arrival of Nettie, who greets her sister with the fulfillment of her dreams, her two children.

The original Broadway production of The Color Purple premiered December 1, 2005 and ran for over two years. LaChanze, who starred as Celie, won a Tony Award for Actress in a Musical. She was replaced by Fantasia, who won received a Theatre World Award. A decade later, the current stripped down revival, with an amazing cast, exalting message of redemption and triumph, magnificent music, and incredible voices, is destined for even greater success.