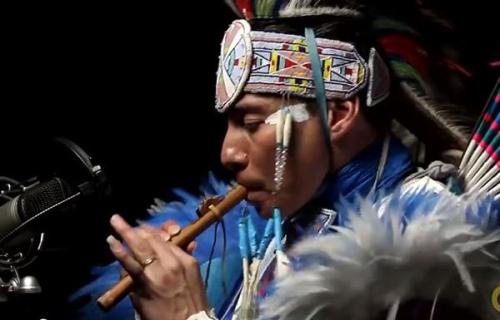 Supa Man is Native Hip Hop! There is no question about his Native Heritage. He said, “Hip-hop was talking about the ghetto life, poverty, crime, drugs, alcohol, teen pregnancy; all that crazy stuff that happens in the ghetto is similar to the reservation life. We can relate to that.”

Supaman and world champion dancer Acosia Red Elk team up on this visually stimulating video for the song called “Why.” Very well put together. Excellent video! Keep it real rez!

Drezus is mad, “Our people are overlooked and we are the people of this land and we’re treated as if we’re nothing … “

Since a teenager, when he earned the nickname “Biggie” for his chubby stature and ability to freestyle, Drezus has been winning people over with his rap skills.

Only 18 at the time, he tried to kill himself, downing a bag of coke and fifth of whiskey to try to numb his brain enough to slit his own throat. He was found by strangers in a puddle of cash and drugs, passed out on the side of the road.

It would take him 14 years, multiple jail stints and another attempt on his life (this time by someone else) to figure it out. Now he feels like, “Yo be strong. We don’t have to be selling dope or stabbing people. We have a bigger fight to take on.”

City Natives is a Canadian aboriginal based group consisting of four members: Beaatz, IllFundz, Gearl & BnE. Originating from New Brunswick and Nova Scotia, all four members whom are closely affiliated with one another, decided to form what they consider as an “unstoppable” alliance.

Individually, they all possess certain styles and aspects of the hip-hop industry. From underground to mainstream, they have combined their talents together to provide an original and unique style of music that differentiates them from other artists. As solo artists, they’ve all built a solid resume for themselves over the years as well as gained numerous fans through-out all of Canada.

For Frank Waln, 25, an award-winning Sicangu Lakota hip-hop artist, music is medicine. Born and raised on the Rosebud Sioux Reservation in South Dakota, Waln made his way to Chicago to earn a degree in audio arts and acoustics and embrace his true calling as an artist. His music embodies indigenous reality and values, bringing much-needed healing and creating pathways of empathy.

“The culture shock I encountered when I moved to Chicago, realizing that people don’t know about Natives. The first week I was here, I met a girl who thought Native Americans were extinct,” he said.

Waln especially takes issue with the way the Native American experience is exploited. .” He feels it’s important that Native Americans are the ones to tell their story, for cultural understanding and unity to be achieved. 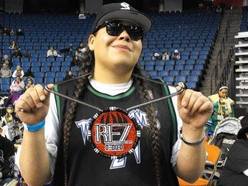 Born Jared Big Canoe, J-Rez is a Hip-Hop artist from Georgina Island First Nation Ontario. Since the age of 12, he has been sharpening his skills as a rapper.

In the past decade J-Rez has produced Cd’s for his group “Rezset”, released a solo album, Ghost written for aspiring artists, travelled the country.

. J-Rez is currently involved in a Diabetes Awareness Initiative called “Reztore Pride” He has a song called “It ain’t Easy” which addresses the issue of diabetes in the native community. The song is due to be released on the second Reztore Pride album.

Like many Native rappers, Red Cloud, half of the group Lightning Cloud has faced incredible hardship in his life and uses his music to advise his listeners. He was born to a gang-affiliated family in Hawthorne, CA; he got his first tattoo at eight months old. He was an active gang member by the 7th grade, a product, in part, of mainstream gangsta rap. But when Red Cloud found old-school hip-hop, he realized there was more to music and life than guns and drugs. Now, he uses his music to empower trapped Native youth to choose a different kind of life, too.

Sten Joddi is an enrolled member of the Muscogee Creek Nation of Oklahoma. Sten Joddi means “Indian” in the Muscogee Creek language. He became a fan of rap music in his early teens. He was signed to Red Vinyl Records in late 2011 which is Native American owned and operated by Litefoot (rap artist and entrepreneur), Blake Trueblood (attorney), Architracks (music producer) and Gyasi Ross (attorney and author).

Hip-hop lore holds that Litefoot is the first Native American rapper to hail from a federally recognized reservation. He started his own label, Red Vinyl Records and released 12 studio album, featuring songs like “My Land,” which tells the story of all the pain white America has showered on Native Americans throughout history: “Raped our women and killed our children,” he raps. “Replaced all the greenery with concrete buildings.”

He annually spends months of his time working on various reservations across the United States and Canada. His most recent music and speaking tour was the “Reach The Rez Tour.”

Having a famous father can be a lot to live up to, But Nataanii is anything by uneasy with Russell’s legacy.

“I maintain the mindframe of AIM……., It’s been a process, I feel like if I didn’t have my Lakota beliefs then I would be lost. It’s been hard, but I have so much that he left instilled in me,” he says.

Huge influences on him have been Nas, Wu Tang, A Tribe Called Quest, and many others but he didn’t take his music seriously until he heard of an artist named J. Cole. He said when he first heard him in early 2010, he really related to his music. So now he is very serious about it! 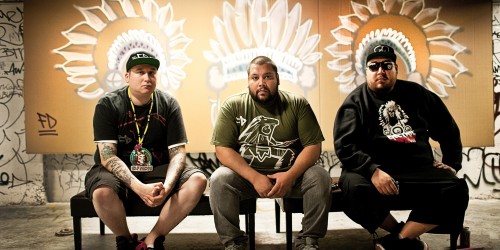 Not to confuse with Q Tip’s A Trabe Called Quest, A Tribe Called Red are a Canadian electronic music group, who blend instrumental hip hop, reggae, and dubstep-influenced dance music with elements of First Nations music. Based in Ottawa, Ontario, the group consists of three DJs: Ian “DJ NDN” Campeau (of the Nipissing First Nation), Tim “2oolman” Hill (Mohawk, of the Six Nations of the Grand River), and Bear Witness (of the Cayuga First Nation). 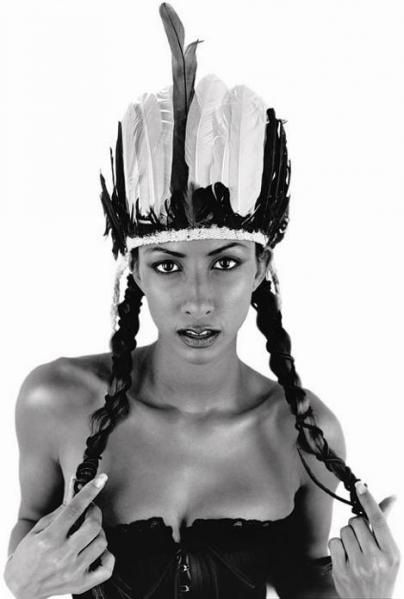 Did you know that Sole was of Native American (Choctaw), African-American and European descent? Her debut album “Skin Deep” in 1999 was so sensational which contributed female rappers phenomenon back in those days. She filed for divorce from R&B star Genuwine. She is still looking pretty.