Fall officially begins September 22nd, however most Americans (especially in the North) are saying “Goodbye summer” because the celebration of Labor Day (September 4th) is the symbolic end of the summer.

Summer in New York City is known for special outdoor events, and one of the most memorable of this summer was the 4th Annual WBLS Radio R&B Festival on August 12th at the Central Park Summerstage featuring Eric Benet, Salt-N-Pepa, Christopher Williams, Kenny Lattimore, and Q Parker from the group 112.

It was a four hour old school party as Chubb Rock pumped up the crowd with his 1991 hip-hop hit “Treat ’em Right” and DJ Bent Rock kept the classics flowin’ on the 1s and 2s.

Kenny Lattimore opened the show crooning for the ladies and setting a romantic mood with his 1997 hit “For You.” 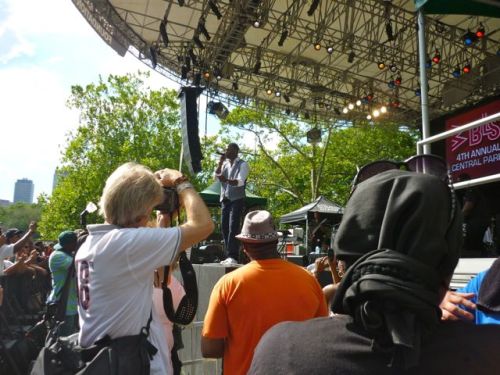 Q Parker from the group 112 followed Lattimore and performed songs from his upcoming solo CD The Manual. Parker has a fitness calendar and takes pride in his physique, and the women screamed their approval when he ripped off his shirt and enthusiastically displayed his six-pack.

Just as the women were calming down, they were driven to a frenzy by the unexpected appearance of Denzel Washington who introduced his long time friend, Christopher Williams. Denzel sat at the back of the stage as Williams performed with a full band and four female dancers. He brought back memories of “NewJackCity” as he kicked off his set with his 1991 number soundtrack hit “I’m Dreamin’.” Williams also sang several songs by his late idol Teddy Pendergrass including “Love T.K.O.”

The party continued with Salt-N-Pepa, who after 27 years in the music business, still knows how to work the crowd. It was a family affair as Salt shared the stage with her children and her husband Gavin Wray. Pepa, who looks “sex-sational” at the age of 47, boasted that she’s still single and ready for the right man. They brought out another hip-hop star from Queens, New York, Dres from Black Sheep, who turned the crowd out with his 1991 classic “The Choice Is Yours.” Salt-N-Pepa returned to perform all their hits, leading up to their grand finale, “Push It.”